According to the Bureau of Justice Statistics, 6.6 million adults in the U.S. were stalked in a one-year period. Three-fourths of those people know their stalker. Stalking is a crime that is pervasive, dangerous, & potentially lethal.  It is not a joke, it is not romantic, and it is NOT okay.  1 in 4 women and 1 in 13 men will be victims of stalking in their lifetime.  While women are more likely to be stalked than men, anyone can be a victim of stalking.  Fortunately, stalking is one of the few crimes where early intervention can prevent violence and death.

Stalking is a crime under the laws of all 50 states, the District of Columbia, the U.S. Territories, and the Federal government.  Stalking often intersects with other crimes such as domestic violence, sexual assault, and harassment.  It is often a precursor to more violent crimes, so early intervention is important for preventing further violence.

In Wisconsin, a person stalks a victim when he or she engages in a “course of conduct” that causes the victim to experience serious emotional distress or to fear bodily injury or death to them self, to a family member, or to a member of their household.  If the stalker knew or should have known that at least one of the stalking acts would cause the victim to experience this distress or fear, the stalker may be charged. In most instances, a course of conduct means two or more acts carried out over any period of time.   However, if a person had previously been convicted of a domestic abuse offense or sexual assault offense against the same victim, the person may be charged with stalking after only one stalking act against the victim.

The majority of stalking cases involve men stalking women, but men do stalk men, women do stalk women, and women do stalk men.  A stalker can be someone you know well or someone you don’t know at all. Most have dated or been involved with the people they stalk.  Intimate partner stalkers frequently approach their targets, and their behaviors escalate quickly.  Two-thirds of stalkers pursue their victims at least once per week, many daily, using more than one method of approach.  Weapons are used to harm or threaten victims in 1 out of 5 cases, and almost 1/3 of stalkers have stalked before.  Stalking is serious, often violent, and can escalate over time. 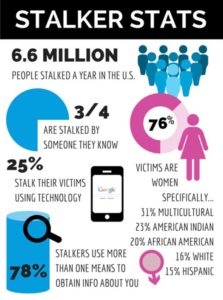 Some Things Stalkers Do:

You are not to blame for a stalker’s behavior.

If You Are Being Stalked, You May:

These are common reactions to being stalked.

Things You Can Do

Stalking is unpredictable and dangerous. There are no guarantees that what works for one person will work for another, yet there are steps you can take to increase your safety.